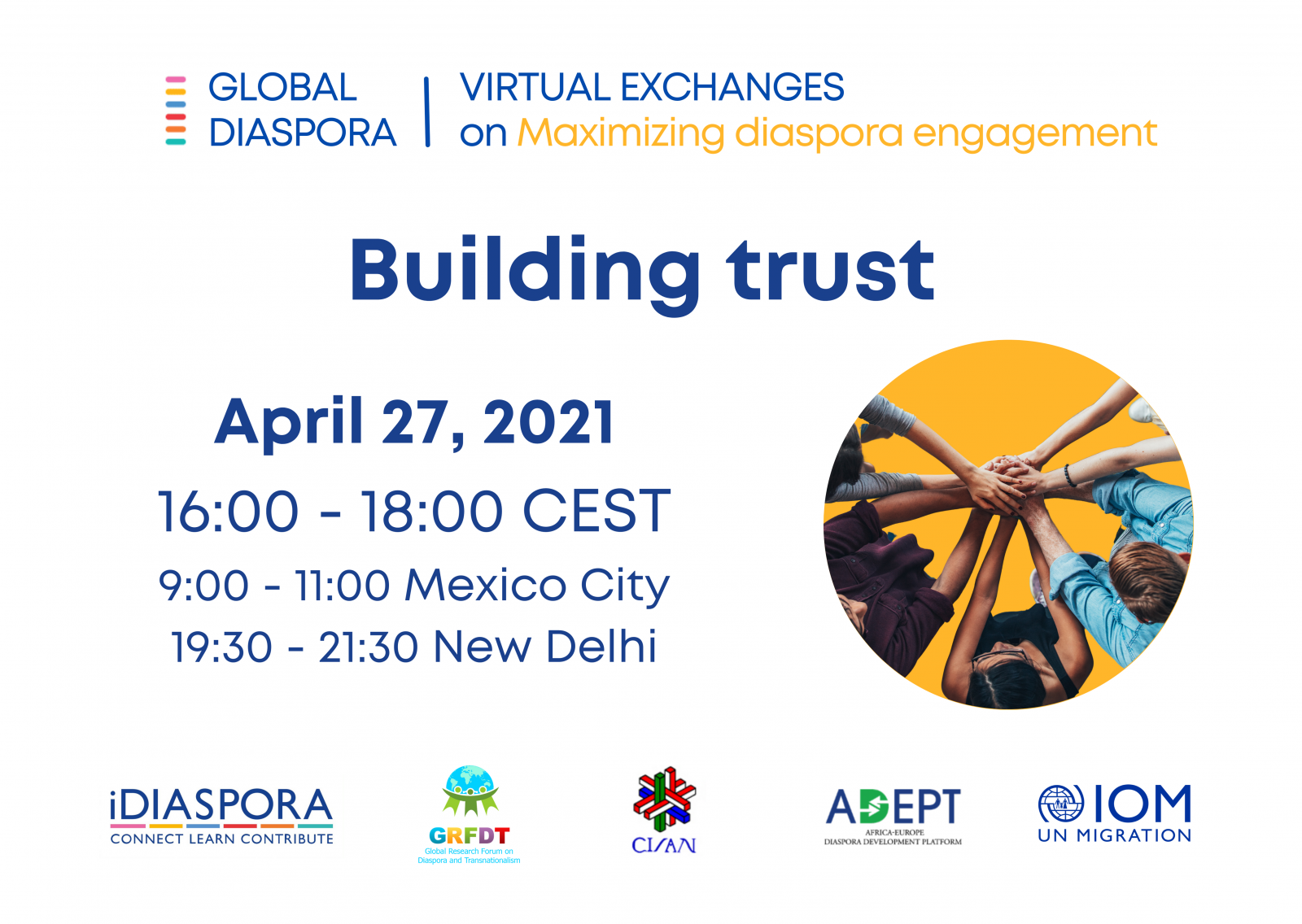 In 2020, iDiaspora coordinated three global exchanges with members of the diaspora responding to the pandemic. Through these virtual dialogues, different actors involved in the development of diasporic initiatives in America, Europe, Africa, and Asia were able to learn and share relevant experience to better include their members when responding to the global health crisis.

These events convened nearly 300 stakeholders including diaspora leaders, policymakers, academics and social workers interested in learning more about how diasporas responded to the COVID-19. These three global events contributed to the better understanding of diaspora engagement on three different levels. First, as a result of these events, it was possible to identify the different ways that transnational communities responded to the global pandemic through prevention, protection, relief, and recovery interventions. Second, during these sessions, participants shared a set of good practices in diaspora engagement based on connections, partnerships, and self-empowerment. Finally, through these discussions, participants were able to identify synergies and concrete collaboration opportunities. A key example was the foundation of the Global Diaspora Confederation, the world’s largest diaspora-led civic society organization to bring together diaspora organizations from across the world.

Although there are relevant global actors and important initiatives emerging to accelerate diaspora’s contributions to their homelands and hostlands, there are common challenges faced by stakeholders such as the lack of trust, difficulties regarding fundraising and the sustainability of initiatives in the long-term, preventing diasporas to reach their full potential and the establishment of more collaborative and successful environments for diaspora global engagement.

The 2021 Global Exchanges aim to gather experts on these topics to provide information on how to overcome common challenges faced by stakeholders engaging in transnational initiatives. By providing concrete strategies on how to build trustworthy relationships, find resources and funding and develop long-term strategies, stakeholders will be able to boost their transnational initiatives. 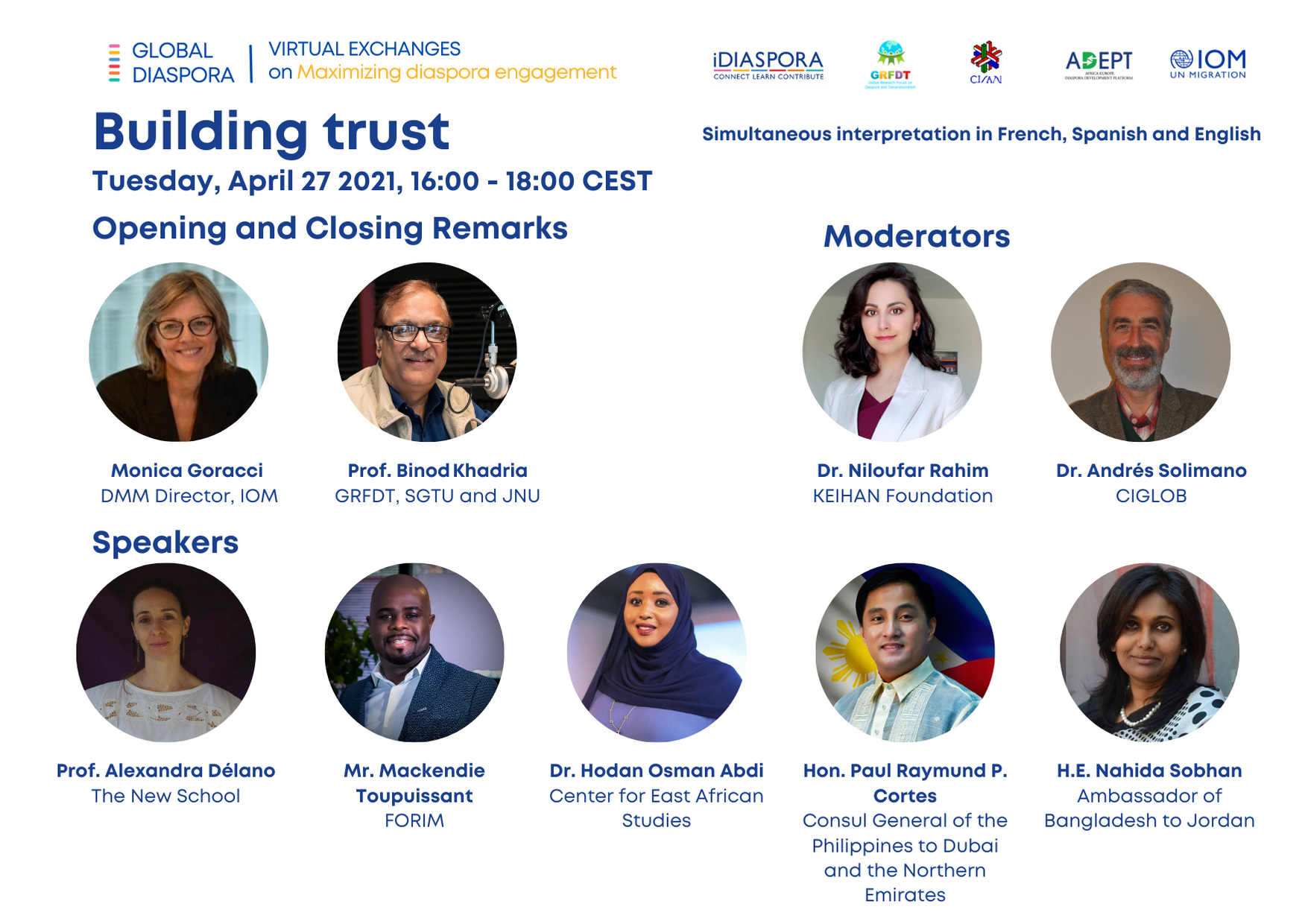 Monica Goracci is currently the Director of the Department of Migration Management of IOM in Geneva.

She had been Chief of Mission of IOM in Germany for almost four years, after having headed the Donor Relations Division at IOM Headquarters in Geneva for six years.

She joined IOM in 1999 in Kosovo after having worked for almost three years in WHO Headquarters in the Division of Violence and Injury Prevention. In 2002 she moved to Rome, first working on an EU funded integration project and subsequently took over the functions of Regional Programme Development officer covering the Mediterranean. She also undertook several missions to the Balkans during the time in Rome. In December 2004 she moved to Portugal where she served as Chief of Mission for IOM until 2010.

She holds a University degree in neurological and psychomotor rehabilitation in children from the University of Rome La Sapienza and has worked in hospitals in Italy and in Ethiopia prior to joining WHO in 1996.

Chair of KEIHAN foundation and active member of International Federation of Medical Students’ Association and International Physicians for the Prevention of Nuclear War. She has supported many projects to improve health care and higher education in Afghanistan. Born in Kabul in 1987, she left Afghanistan when she was two years old and arrived in the Netherlands at age ten, where she studied medicine at Leiden University and has since worked in the following fields: emergency health, paediatrics, gynaecology and as general practitioner.

Andrés Solimano holds a Ph.D. in Economics from the Massachusetts Institute of Technology (MIT). He is founder and Chairman of the International Center for Globalization and Development (CIGLOB). Formerly Dr. Solimano served as Country Director at the World Bank, Executive Director at the Inter-American Development Bank and Director of the Chile office of the Latin American School of Social Sciences (FLACSO) and Director of project on International Mobility of Talent with the United Nations University-World Institute of Economic Research in Helsinki. Dr. Solimano is frequent guest to deliver invited lectures to main universities and public forum globally. His most recent books as sole author includes The Rise and Fall of the Privatized Pension System in Chile, Anthem Press (2021), A History of Big Recessions in the long 20th Century, Cambridge University Press (2020), Global Capitalism at Disarray, Inequality, Debt and Austerity Oxford University Press, (2017), Pensiones a la Chilena, Editorial Catalonia, (2017); Economic Elites, Crises and Democracy, Oxford University Press 2014, International Migration in the Age of Crisis and Globalization (2010), Cambridge University Press and other volumes. He is also editor of The International Mobility of Talent: Types, Causes and Development Impact (2008), Oxford University Press.

Alexandra Délano Alonso is Associate Professor and Chair of Global Studies at The New School and the current holder of the Eugene M. Lang Professorship for Excellence in Teaching and Mentoring. She received her doctorate in International Relations from the University of Oxford. Her research focuses on diaspora policies, the transnational relationships between states and migrants, migration in the Central America-Mexico-US corridor, sanctuary, and the politics of memory in relation to borders and violence. She is the author of Mexico and its Diaspora in the United States (2011), From Here and There (2018) and Brotes (2021). She is co-founder and former co-director of the Zolberg Institute on Migration.

Mackendie TOUPUISSANT has been active in the associative field since 1994, first through a youth association that he founded and then through a development aid association for Haiti. He then joined the Plateforme des Associations Franco-Haïtiennes de France (PAFHA) as a member and became its treasurer and then its President from 2009 to 2014. Formerly Treasurer of the Forum des Organisations de Solidarité Internationale Issue des Migrations (FORIM), the French platform of diasporas, he has been its President since 2019. Politically involved, he served as a municipal representative from 1995 to 2014.

Dr Hodan Osman Abdi is a university lecturer and associate research fellow at the Institute of African Studies at Zhejiang Normal University. Dr Abdi obtained her PhD in communications studies from Zhejiang University in 2016, and holds an MA in Chinese language and culture as well as a BA in business administration. Her research focuses on China-Africa relations and the Belt and Road Initiative. Dr Abdi has published a number of academic papers, book chapters, media articles and translated books on a range of subjects relating to Media Economics, Communications, and China-Africa cooperation. In 2017, She Directed the award-winning documentary film Africans in Yiwu which examines the lives of the African community in China. Dr Abdi has a native-level fluency in multiple languages including English, Arabic, Mandarin and Somali.

Paul Raymund P. Cortes is Consul General of the Philippines to Dubai and Northern Emirates, United Arab Emirates, since 2015. Earlier, he served as the Vice Consul and Consul of the Embassy of the Philippines in Budapest and as the Consul and Deputy Consul General for the Philippines in Honolulu. He has also served as the Director of the Office of ASEAN Affairs for the Department of Foreign Affairs.
In 2018 he won the Presidential Award in the Foreign Service Gawad Mabini Award Rank of Dakilang Kamanong and PH Consulate General in Dubai as Best Organization in the Foreign Service. H.E. Paul Raymund P. Cortes holds a BSc in Computer Science from the Ateneo de Manila University and a Masters in Public Management from the University of the Philippines.

Binod Khadria is presently Distinguished Professor and Director of the Centre for New Initiatives and Research (CNIR) at Guru Gobind Singh Tricentenary University (SGTU), Gurugram, NCR-Delhi. Prior to this, he has been a Professor of economics, education and international migration at Jawaharlal Nehru University (JNU) in New Delhi, having a trajectory of three decades of teaching, research and publications on migration, diaspora and transnationalism. In 2017-18 he held the inaugural Indian Council for Cultural Relations (ICCR) Chair on Contemporary Indian Migration and Diaspora at Rutgers University, USA, and was a key commentator in the processes that led to the United Nations Global Compact for Safe, Orderly and Regular Migration in 2018.

The event is open to all diaspora communities with a focus on facilitating exchange between global diaspora communities. All participants will then be invited to register through iDiaspora and will have the opportunity to share their experiences and submit inputs and initiatives during the plenary discussion.