EMIGRATION OF HEALTH AND INFORMATION AND COMMUNICATION TECHNOLOGY PROFESSIONALS FROM BOSNIA AND HERZEGOVINA: CHALLENGES AND OPPORTUNITIES 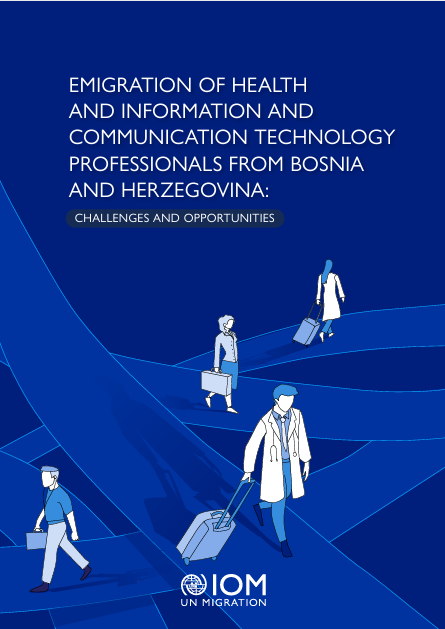 In the recent years, the number of Bosnia and Herzegovina citizens emigrating has reached alarming proportions, which is particularly evident in the health-care and ICT sectors. As comprehensive data on this phenomenon is missing, IOM has set up a close partnership with government authorities and the private sector relevant to labour migration issues and, through its Evidence-Based Labour Migration Policies for Health-care and ICT Sectors in Bosnia and Herzegovina project, implemented a study to gather evidence on the emigration of health-care and ICT professionals.

The empirical approach for addressing this research is a mixed methods approach, where a sequential use of different methods, including desk review of literature and policy materials and of secondary data from surveys and international and in-country official statistics, and primary, qualitative data collected through interviews was conducted from October 2020 to March 2021. This was followed by an extensive peer review process and consultation process with government authorities and nongovernment stakeholders, including policymakers, the private sector, academia, civil society organizations, media, development cooperation partners and United Nations organizations relevant to labour migration, labour market and economic development, health-care issues and ICT from April to October 2021. The research, in particular the section on the impact of migration on the health-care system, is an exploratory one, and the evidence harnessed is cautiously interpreted.

The available evidence on the scope and profile of emigrants from Bosnia and Herzegovina’s health and ICT sectors suggests that labour emigration is at an alltime high and has been increasing every year, with most of the emigrants heading to Croatia, Germany and Slovenia, followed by Austria and Italy, but lately also in limited numbers to Czechia, Norway and Sweden. Germany is the top destination country for health professionals; mostly young female nurses migrate, but there is a significant number of medical doctors, dentists and pharmacists who migrate as well. For the ICT sector professionals, most of them migrate to Austria, Croatia, Germany, Serbia and the United States of America. Demographic and skills profile of emigrants in both sectors shows that both younger recent graduates as well as experienced professionals with their families migrate. The empirical evidence about drivers of emigration of health and ICT sectors professionals from Bosnia and Herzegovina revealed 12 distinct emigration drivers, grouped as political and legal, economic, social and others. However, what is common to most respondents is that political factors (referring to overall conditions of political uncertainty) are perhaps the most influencing factors, followed by employment opportunities and wage differentials. Among social factors, education, health care, family, media and access to information feature most prominently. Other factors, such as environmental degradation and its impact on livelihoods, especially within ICT sector, have increasingly started to play a role in decision-making on migration.